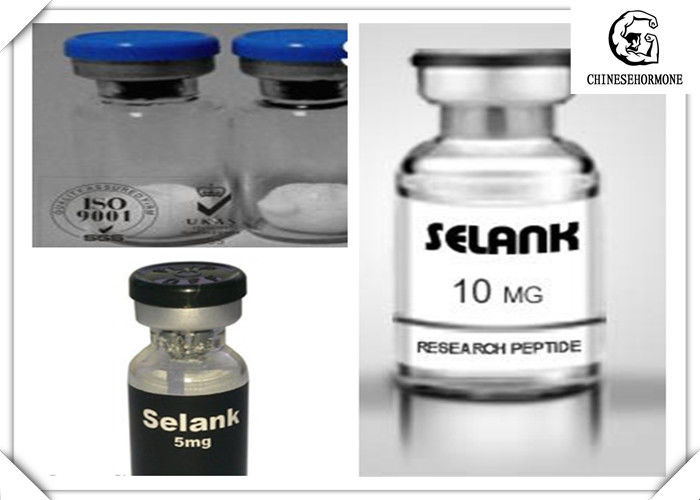 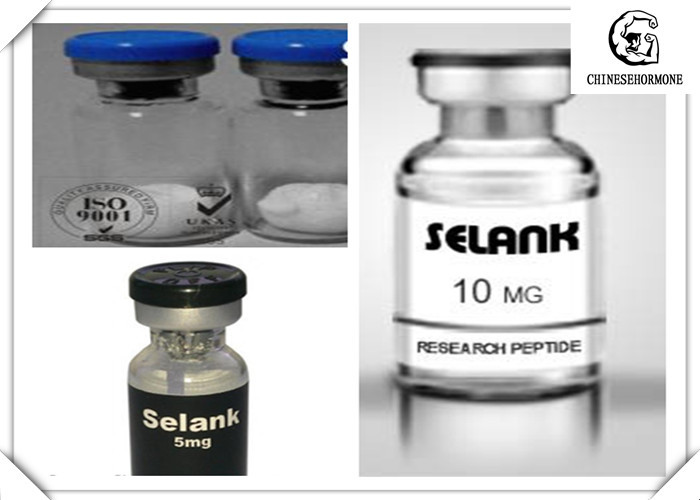 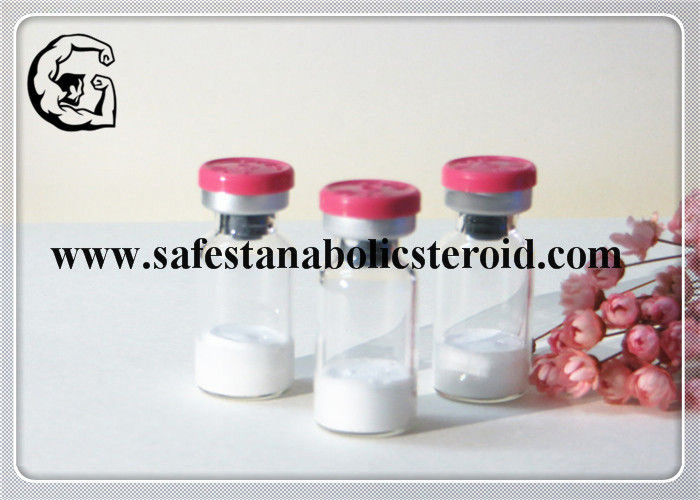 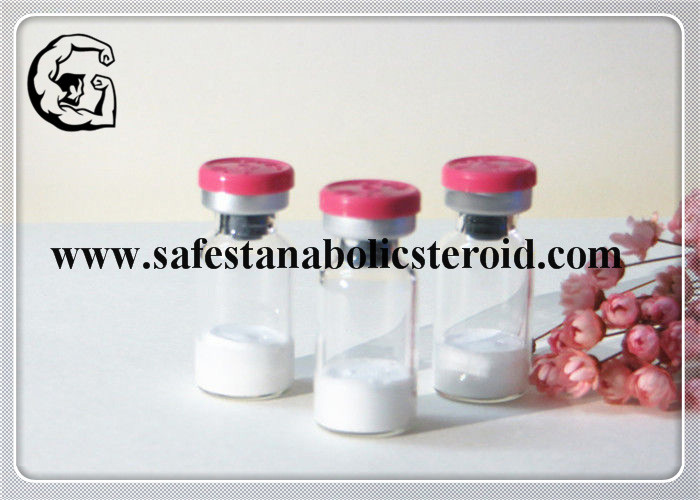 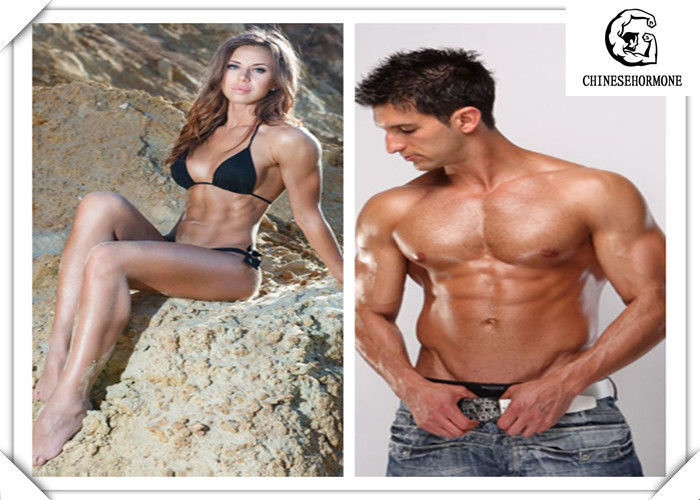 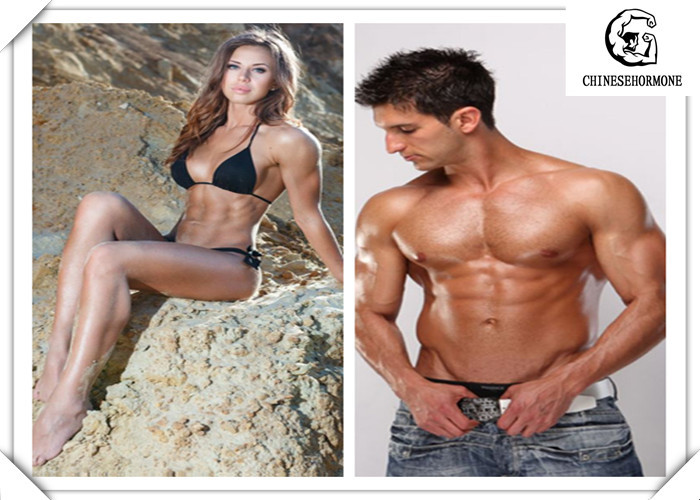 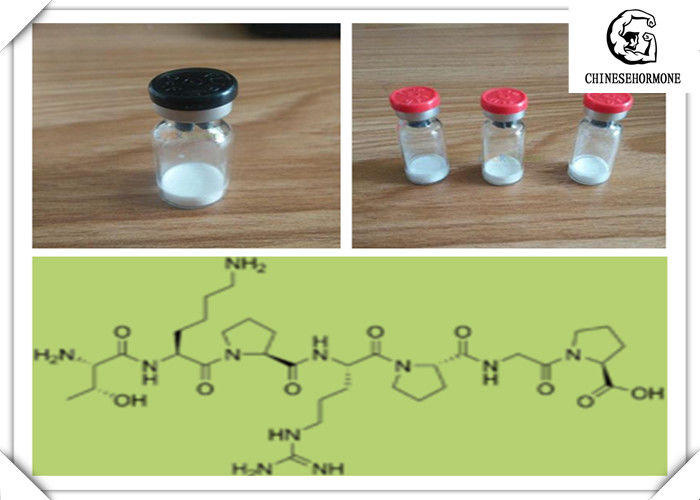 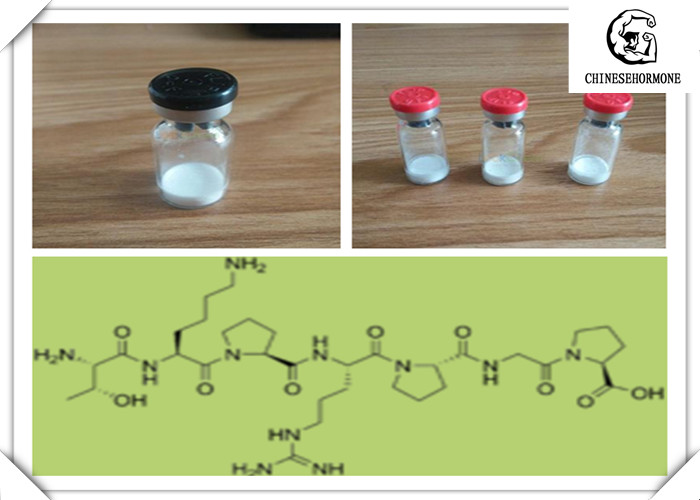 Product Name:Selank(5mg/vial)
Alias:Selanc
CAS:129954-34-3
MF:C33H57N11O9
MW:751.9
Sequence:Thr-Lys-PRO-Arg-PRO-Gly-PRO
Purity: 99%
Specification:5mg/vial
Appearance: White Lyophilized Powder
Place of Origin: China
Standard: USP
Certification: SGS
Method of Analysis: HPLC
Storage: Lyophilized peptides although stable at room temperature for 3 months, should be stored desiccated below -18° C. Upon reconstitution of the peptide it should be stored at 4° C between 2-21 days and for future use below -18° C.

Selank is a nootropic, anxiolytic peptide based drug . Selank is a heptapeptide with the sequence Thr-Lys-Pro-Arg-Pro-Gly-Pro. It is a synthetic analogue of a human tetrapeptide tuftsin.It has been shown to modulate the expression of Interleukin-6 (IL-6) and affect the balance of T helper cell cytokines.

Selank is a nootropic, anxiolytic peptide based drug developed by the Institute of Molecular Genetics of the Russian Academy of Sciences. Selank is a heptapeptide with the sequence Thr-Lys-Pro-Arg-Pro-Gly-Pro. It is a synthetic analogue of a human tetrapeptide tuftsin.

Selank is a synthetic analogue of the immunomodulatory peptide tuftsin; as such, it mimics many of its effects. It has been shown to modulate the expression of Interleukin-6 (IL-6) and affect the balance of T helper cell cytokines. It has been shown to influence the concentration of monoamine neurotransmitters and induce metabolism of serotonin. There is evidence that it may also modulate the expression of brain-derived neurotropic factor (BDNF) in rats.

Selank, as well as a related peptide drug, semax, have been found to inhibit enzymes involved in the degradation of enkephalins and other endogenous regulatory peptides, and this action may be involved

The influence of a new heptapeptide Selank on microcirculation in anesthetized white rats was investigated. Selank (Thr-Lys-Pro-Arg-Pro-Gly-Pro) is a new synthetic anxiolytic which exerts obvious antiulcerogenic action and promotes healing of experimental ulcers.

Action of the peptide on gastric blood flow in the stomach by using the method ofhydrogenic clearance and Selank action on mesenteric lymphatic contractility by microscopical observation in situ, were studied. Selank fail to influence basal gastric blood flow but it can normalize blood flow reduced by indomethacin.

The high doses of peptide (10(-6)--10(-10) M) also augmented the contraction amplitude but decreased its frequency. The maintenance of adequate blood flow and lymphatic vessel contractility can be one of the mechanisms of the Selank antiulcerogenic properties.

While Selank is classified as a nootropic-anxiolytic type drug, it uses extend beyond the relief of anxiety and improved cognitive functioning alone. A few areas in which Selank may find itself useful are: Stress reduction, the alleviation of depression, reversal of anhedonia, improvement in mood in emotionally stable individuals, and cessation of insomnia.

It's always best to start with a low dose and gradually build up to your individual comfortable levels.

duration: from 10 days to as long as needed

frequency of injection:1 injection per day for low dose, 2 injections for higher dose (divided between morning and late afternoon injection)

Of course, with Selank being a nootropic-anxiolytic, it may also prove useful for the treatment of different forms of anxiety, such as G. A. D (generalized anxiety disorder), S. A. D (social anxiety disorder), Panic Disorder, as well as non-diagnosed bouts of anxiety. As a nootropic, Selank can help enhance mental sharpness, reduce mental fatigue, improve the ability to focus, improve cognitive functioning while in a sleep deficit, and enhance memory.

These effects are provided without the negative side effects typically associated , such as physical dependence, psychological addiction, and decreased motor ability. In fact, Selank is largely devoid of side effects, with the large majority of researchers claiming that it is a "side effect free" compound. This makes Selank more suitable for long-term use.

improvement of learning and memory processes

restoration of balance of serotonergic and noradrenergic brain system activity

antiviral activity with no negative effects

stabilization of mood and overall feeling of wellbeing